Two organizations that are running large scale COVID-19 testing for their employees/members include Tyson Foods and the US Major League Baseball. While Tyson Foods uses diagnostic (Polymerase Chain Reaction — PCR) testing, the MLB has used rapid antibody testing, in addition to its use of the saliva testing kits.

The Number and Frequency of Tests 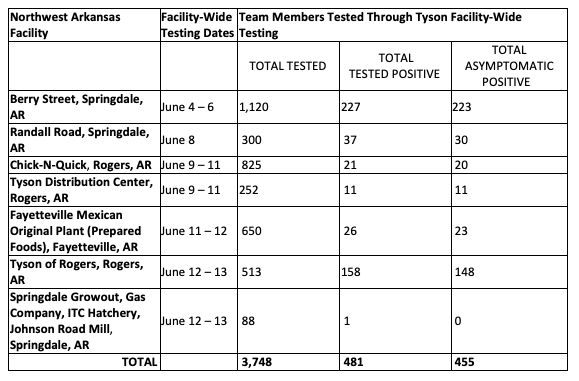 The Number and Frequency Tests

The research team reviewed various press articles (such as The Counter, Financial Times, New York Times and others) and other relevant resources to identify various organizations that have conducted or are conducting large scale COVID-19 testing for their employees/members. Through this, we found various organizations, such as Rosen Hotels & Resorts, Smithfield Foods Inc., Ford Motor Co., UnitedHealth Group Inc., Rosen, U.S. Steel, Microsoft, Amazon, Major League Baseball, Las Vegas Sands, Station Casinos, Wynn Resorts, Kroger, and Tyson Foods. While some have conducted tests, such as Tyson Foods, some have announced their plans to conduct such tests, such as Amazon. For each organization, we reviewed the Covid-19 testing program for employees. Through this, we identified Tyson Foods, as a company that deploys the traditional PCR testing method. However, we found limited organizations that have deployed or are deploying rapid testing or other methods. While we could identify Major League Baseball (MLB) as one that has deployed rapid antibody testing, there aren’t many pieces of information to provide a robust case study. Hence, we’ve augmented it with the information on its deployment of the saliva testing kits.

What are Some Improvements in the Treatment of COVID-19 That Have Resulted in Reduced Mortality Rate?

What are The Pros and Cons of Automated Resume Screening Products?

The Latest Industry Trends in Information Technology and Security

Three of the Largest Mass Vaccination Events in the U.S.